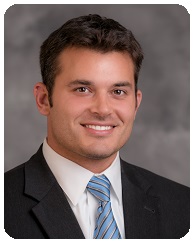 Dan Gabris is a trial attorney at Gabris Law, LLC. Over the past 7 years, Dan has argued more than 30 civil trials to judges or juries throughout the states of Missouri and Kansas, yielding favorable results for a majority of his clients. A summary of a few past cases and outcomes in which Dan served as counsel can be found here.

Dan was born and raised in St. Louis, Missouri where he attended Lindbergh High School. After high school, Dan went on to play football at Western Illinois University and Northwest Missouri State University. After he finished his collegiate athletic career, he attended Missouri State University where he obtained bachelor’s degrees in (1) International Business and (2) Spanish. He also worked for the Springfield Metropolitan Bar Association, which led him to his first position as an investigator at a prestigious civil defense law firm in Springfield, Missouri.

During law school, Dan also served as the Business Editor of the UMKC Law Review, was a founding member of the Spanish Legal Interpretation Society, and was actively involved in the Student Bar Association Mentorship program.  In addition, Dan received the Excellence in Estate Planning award from UMB Bank—only one student in the law school graduating class is recognized with this award. During his fifth semester of law school, Dan taught himself Italian and subsequently attended law classes (in the Italian language) in Rome, Italy during his final semester.

Over the past 12 years, Dan has been working in various positions at law firms around Missouri, learning from and working with some of the most respected attorneys in the profession. In addition to working at several law firms, he also worked for two Missouri state court judges and a United States federal judge, where he studied under their guidance in pursuit of his goal of becoming a great trial lawyer. During those experiences, Dan had the opportunity to learn how the court system works behind the scenes, which gave him valuable insight into how judges think and the processes they use to analyze the issues before them. He also had the opportunity to observe some of the top litigators in the state, and sometimes nation, argue civil and criminal jury trials as well as various other matters, such as bond reduction hearings, motions, and mediations.

Every year from 2016 to the present, Dan has been recognized by Super Lawyers as a Rising Star for demonstrating excellence in the practice of law (only 2.5% of attorneys in Missouri and Kansas are recognized with this award). During his career, Dan has litigated cases ranging from $2,000 to $5,000,000 in dispute and has tried numerous cases, as lead counsel, to both judges and juries.

Dan has also given several continuing legal education presentations on construction and real estate to hundreds of other lawyers in the St. Louis and Kansas City area and has spoken to brokerage firms, contractor societies, and real estate professionals regarding best practices in construction and real estate cases and precautionary measures aimed at preventing litigation. He has also returned to his alma Mater, Lindbergh High School, on several occasions to speak with the students about pursuing a career in the law as well as other life matters.

Dan’s practice has been focused primarily on assisting clients with matters relating to construction and real estate, but he has also obtained significant settlements for clients who have been injured in car accidents.

Outside of work, Dan’s interests include sports, reading books, cooking, eating, traveling, and refining his Spanish and Italian skills.

The program was led by the Honorable Robert E. Larsen of the United States District Court for the Western District of Missouri and by the Honorable W. Brent Powell, formerly of the 16th Circuit Court of Jackson County, Missouri, and presently a Missouri Supreme Court Justice, and was composed of training and practical sessions where the participants would present arguments and question witnesses and generally prepare and present mock trials, receiving mentoring and critiques from local judges and other trial attorneys.

Avvo.com is a commonly known legal profile and rating site that allows clients and peers to leave recommendations and feedback regarding attorneys.  Avvo uses a variety of criteria to determine its ratings.

Only one student in the law school graduating class is selected for this award.  The award recognizes individuals who provide superior estate planning assistance to individuals in the Kansas City community.

Dan formerly served as the vice chair of the Social Committee for the Young Lawyer’s Section of the Kansas City Metropolitan Bar Association where he worked with other members in the legal community to organize social events and build camaraderie amongst his colleagues in the legal profession.

Dan was recognized with CALI awards (highest grade in the class) in both Legal Writing and Professional Responsibility in law school.

Dan is currently licensed to practice law in Missouri and Kansas state courts and in the United States Courts for the Eastern District.

Dan Gabris is a trial attorney who practices primarily in the areas of construction law, real estate, and contractual disputes and drafting. He has been selected by Super Lawyers as a Rising Star for 2016, 2017, 2018, and 2019. He also maintains a coveted 10/10 Avvo rating and is the managing member and founder of Gabris Law, LLC.

Completion of the below form does not make you a client of Gabris Law, LLC. In order to become a client, you must have a fully signed Engagement...

The information on this website was not intended to be legal advice and does not form an attorney-client relationship.

No attorney-client relationship is created by any use, access, or interaction with this website. In order to retain our firm for representation, you must first contact our lawyers and enter into an attorney-client contract. If that has not occurred, you are not represented by our firm.

The choice of an attorney is an important decision and should not be based solely off advertisements.